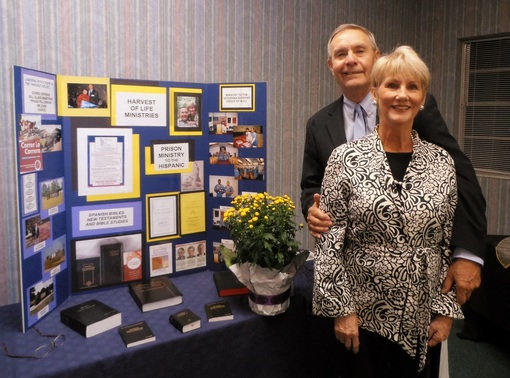 Each week Dan Nase travels approximately 1.000 miles to six different prisons in five North Florida counties. He conducts chapel services, Bible studies and serves as a mentor to inmates in both the Spanish and English languages. In addition to his weekly commitments he is often asked to preach at work camps and fill in or assist Chaplains with preaching on Sundays, serving the Lord’s Supper and baptismal services at various prisons.  He is also involved with Bill Glass Prison Ministry, Gospel Express, Prison Fellowship, Kairos and We Care Prison Ministry traveling out of state to participate in prison crusades and revivals.  Dan is always on call to provide worship services here in Tallahassee at Haven of Rest, a homeless shelter.  Several times a year Dan also volunteers to assist in teaching the Prison Volunteer’s Orientation class for the Department of Corrections and the Center for Biblical Studies.
Dan ministers in the prisons of North Florida, 18 services or Faith-Based teachings in six different prisons.  He preached in two events at his home church, Thomasville Road Baptist Church and he taught a 3 hour missions class at The Center for Biblical Studies.  For every hour of ministry, Dan estimates 2 hours of preparation and one hour of travel back and forth. Most Mondays and Wednesdays are dedicated to shipping out Spanish Bible and Bible Studies to inmates around the country.  Furthermore, they handle the receipting of donations, correspondence with donors, and the incarcerated, etc.  It is a labor of love!

In 2014, as a result of his commitment to the prison ministry, he has personally led 98 inmates to the saving knowledge of Jesus Christ 77 inmates were baptized and 57 are enrolled in Spanish Bible correspondence courses. He has witnessed life-changing results as the inmates continue to mature in their faith. To aide them in their Spiritual growth he has raised over $3,000.00 for the purchase of Bibles, study resources, Christian music, postage and literature. Each week the number of attendees grows as they eagerly invite other inmates to attend the services and Bible studies. As an example, one prison went from 12 attendees to 60 at chapel services. This service is at 9:00 on Tuesday morning at Calhoun C. I. where Dan has to travel almost two hours. Those in prison are truly seeking answers to life’s problems in the spiritual realm because they know that the “world” offers nothing of lasting value. For the inmates that take the Bible correspondence courses their self worth is restored when they receive recognition and a certificate of completion for their study efforts. Many of the inmates have chosen to pursue further Christian education in order to prepare them for the ministry upon their release.
Dan’s enthusiasm for serving in prisons has resulted in the decision of many Tallahassee citizens to volunteer their time to prison ministry by mentoring at the Faith Based Dorms at Wakulla C.I and Gadsden C.F.  Several of these volunteers are ex-offenders themselves.  Dan taught in the Dorm every Tuesday a course in character transformation called Experiencing God.  In addition he mentored, along with his wife, four inmates at Wakulla twice a month on Monday nights.  Dan and Marilyn worked alongside the faith-based Chaplain.  Assisting him in counseling and provide material help when needed.  And if all of this wasn’t enough, Dan occasionally speaks at other churches trying to recruit volunteers for Prison Ministry.   He also fills in for the Hispanic pastor at our home church.

While volunteering as a counselor at a Bill Glass Weekend of Champions prison crusade 15 years ago, Dan found that he was the only volunteer who spoke fluent Spanish. While speaking with the Hispanic offenders he learned that there were little or no religious opportunities for them. Many of them requested chapel services in Spanish since they were unable to speak, read or understand English. With the rise of Hispanic inmates in the prison population it became obvious that there was a need for them to be ministered to on a weekly basis.  This experience gave Dan the vision to volunteer his services during the day on a weekly basis. Being that he did not play a musical instrument and was unable to read music he sat at his computer for hours listening to audio-cassette tapes of Spanish Christian music. He typed out the lyrics and transferred them to transparencies to be used on an overhead projector.  He used the tapes and “overhead” for the hymns and praise music during the worship services.  Because of his former missionary experience in Mexico, he decided to contact a friend there who has a Bible correspondence school.  This gave the inmates the opportunity to receive solid Biblical teaching in Spanish.  At the end of the course, a test is given and when completed test are returned to Mexico to be graded.  When courses are returned, Dan hands out a certificate and recognizes the individual before the congregation.  This has been such a rewarding experience for the inmates. Many of them have never received recognition for any accomplishments and this opportunity has encouraged them go on to the next course level. Literally hundreds of them have completed the entire study, which is truly been a rewarding experience. Currently the Spanish Bible correspondence courses are provided by Gospel Echoes. In addition to the music portion of the service, Dan has also devised a makeshift “power point” (using the overhead projector of course) Bible study for the inmates to take notes as he preaches. Dan feels that one of his greatest blessings was when he preached to 24 inmates on death row in Birmingham, Alabama.  His greatest accomplishment has been 47 years of matrimonial bliss to his “first wife” Marilyn!

In 1998, Dan came to Tallahassee after serving 14 years in Mexico as a literature missionary. Dan and his wife Marilyn purchased a franchise, an overnight currier service.  He was first asked by a friend in church to attend volunteer training at the Federal Correctional Institution for women in Tallahassee.  After the orientation Dan and David were given the opportunity to conduct Spanish Bible studies for the Hispanic women. This was Dan’s first time in a prison. On that first night 12 women came to the Bible study and five of them testified that they thank God for ending up in prison because it was in prison that they heard the Gospel message of hope and love. That statement “hooked” Dan and led him into full time prison ministry.  He has heard that many, many times in the last 15 years.
His idea for the study was to teach the Bible like he would have liked to have been taught; combining study, prayer, praise and worship.  As the weeks, months and years progressed the number of worshipers has increased. The theme that ran through all the Bible studies was the “Love of Christ”.  Many men and women have accepted Christ as their Lord and Savior and have experienced the peace that passes all understanding.  They found Christ in prison and for this they are eternally grateful. They realized that God really loves them.  Dan also ministered to and mentored men at Federal Detention Center.  The call to full time prison ministry put more and more pressure on Dan to sell the business and become a full time volunteer. This was not an easy decision since it meant no income and completely relying once again for God to provide.
Upon giving up the business the next logical thing for him to do was to become an official ordained minister through our local church and Chaplain Fellowship Ministries out of Temple, Texas.  Every week Dan travels from Tallahassee to the following Correctional Institutions Franklin, Gadsden C.F., Calhoun, Liberty, Wakulla and Wakulla Annex. He presently ministers in 17 services and travels almost 1,000 miles.  Marilyn ministers at Gadsden C.F.  This correctional facility has 1600 women and Marilyn goes every Tuesday afternoon. She teaches in the dorm that has approximately 65 women and she does it for 3 hours. How about that?!


Faith Based Dorm and Mentoring


In 2002, the Kairos Horizon Faith Based Dorm received 64 inmates into its program. Dan served as the Program Coordinator at Wakulla CI, where he recruited citizen volunteers and helped to train them. He also worked closely with other ministries and churches that have expertise in Biblically based programs that have impacted these inmates. He worked diligently to raise money for Bibles and Biblically based materials. He also worked to put together the mentoring program that is especially important to the inmates of the Faith Based Dorm.  The mentoring program is called “Outside Brothers”. This is one-on-one structured conversations on life challenging issues. All the instruction and mentoring is geared to the ultimate goal of a reduction in recidivism and providing a smooth transition back into society in order to become productive citizens that honor and glorify God. If they do not return is saves the tax payers of Florida $19,500.00 per man or women. As a result many of the inmates have for the first time made contact with family members and are trying to reestablish relationships.  This is a very important program because the recidivism rate is 2 out of ten within 5 years were as in the general prison population it is 7 out of every 10!

We thank Gospel Express Ministries South for supporting us for all these years.  We are truly grateful to God that GEMS has stood by us all these years.  Thank you for this wonderful opportunity to serve the Lord Jesus Christ!

May God Richly Bless You,

Dan & Marilyn Nase
Please remember that Harvest of Life Ministries is not funded by any group or denomination.
We depend upon God and the generosity of those reading this site.
Help us minister by supporting us today.